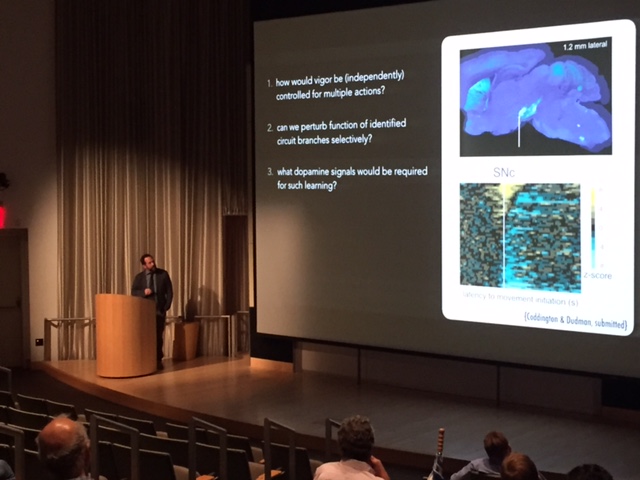 The 3rd Annual University of Michigan Udall Center of Excellence for Parkinson’s Disease Research Symposium was held on  September 13.

The symposium was headlined by the internationally recognized researcher Joshua Dudman, PhD, Group Leader at the Janelia Research Campus, Howard Hughes Medical Institute in Ashburn, Virginia. His talk title was  Basal ganglia circuits for the vigorous pursuit of reward.  In addition, there were talks from a variety of researchers from University of Michigan and Michigan State University pursuing research on PD and related diseases.  These presentations included talks on Fibril seeded synucleionopathy; CRISPR mediated knock-out of PD related genes in the rat substantia nigra; PET imaging of neurodegenerative disorders; Using high density interfaces to the nervous system for the restoration of hand function; Beyond the relay towards pathway-specific optogenetics  in the motor thalmus.

Read more about the symposium in an article featured in the Michigan Daily by Yoshiko Iwai:

With close to 60,000 Americans diagnosed annually, Parkinson’s disease is the second-most-common neurodegenerative disease in the United States following Alzheimer’s disease. With an elderly population, experts are predicting there will be an increasing prevalence of Parkinson’s disease with greater economic burdens on patients due to treatment and lifestyle changes. 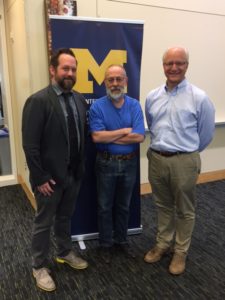 Parkinson’s disease is a neurodegenerative disorder resulting in loss of motor skills due to the progressive loss of dopamine in the brain, particularly the basal ganglia. The symptoms of the disease are often characterized by a tremor, rigidity, difficulty initiating movement and changes in balance. With the progressive death of brain cells, quality of life is also diminished.

The event was hosted by the University’s Morris K. Udall Center of Excellence for Parkinson’s Disease Research, one of nine such centers across the country, to promote understanding of advanced scientific research and, ultimately, its translation into cures for the disease.

The Udall group, supported by NIH National Institute of Neurological Disorders and Stroke, was founded in 1997 after former Congressman Morris K. Udall, who worked in Congress despite a long battle with Parkinson’s disease until 1991. He died from the disease in 1998.

“My personal interest is in understanding fundamental mechanisms of disease as a necessary first step to devise new ways to treat them, at a minimum to reduce the impact of neurological disease on people by making the symptoms better,” Dauer said. “The long-term goal would be to devise ways to halt the progress of disease so many of these symptoms don’t develop at all.”

Dauer spoke about the University’s Udall Center focusing in particular on gait difficulties that emerge later in the progression of Parkinson’s disease. Augmenting cholinergic signals related to gait problems are being tested to delay symptoms associated with walking.

“It would mean a huge amount to patients if the problems in walking either didn’t happen or was delayed. The difficulty is a major milestone in Parkinson’s disease where quality of life goes down, mortality goes up, injuries go up — hip fractures, skull fractures, things like that,” he said.

“(The symposium) is one of many concrete mechanisms by which we can get people in the common space to begin talking about these different ideas,” Dauer said.

He said the center’s goal is “to foster dialogue so people with different perspectives can challenge each other so that we can come up with ideas that are not obvious to one discipline by itself. It’s sort of analogous to the idea of neurochemicals — how do they interact to create unique things?”

Speakers for the event included researchers from various departments at the University, like the Department of Biomedical Engineering, as well as researchers from Michigan State University. Presentations included molecular research to optimize animal models, as well as imaging techniques to better understand the structures and mechanisms involved in Parkinson’s disease.

In addition to inviting leading researchers to the University from local and national institutions, Dauer emphasized the importance of educating the future generation in research. The symposium series provides a place for younger researchers to present research findings, engaging in the larger research community.

“We saw this line drawn between these presentations, which was really interesting, but of course we all use different techniques and strategies to get at these questions,” said Matthew Gaidica, a neuroscience Ph.D candidate, in his presentation. “Bringing those people together — the ones that think about molecules and chemicals and the ones that think about circuits and motor behavior — is really important because we’re attacking this disease on multiple fronts.”

Samuel Pappas, research investigator and post-doctorate in the Dauer Lab, echoed Gaidica’s sentiments on the importance of diversity in research.

“There was everything from molecular work in new animal models to (positron emission tomography) imaging in humans and really modern electrophysiology and new techniques,” Pappas said. “I thought it was a great depth and breadth of research and gave a nice cross-section of the different types of research that are done.”

Dauer emphasized the relevance of interdisciplinary work in tackling complex diseases like Parkinson’s.

“We want people to interact so they can come up with ideas that are not obvious to either one alone,” he said. “This is a long-term problem — we hope we can make a dent in it, but we ain’t going to solve the whole thing. We need absolutely to educate people.”

As a step toward educating people from the research front to the general public to patients, Dauer spoke about the Udall Center’s outreach activities. In addition to the annual symposium and regular research meetings, the center works directly with Parkinson’s patients.

“Only by engaging patients and letting them know that research is the only way forward for their illness — that’s the way to get them engaged to talk to their representatives,” he said. “I don’t care if you’re on the right or the left, disease knows no boundaries. It’s not a partisan comment, it’s a comment about what’s required for science to advance.”