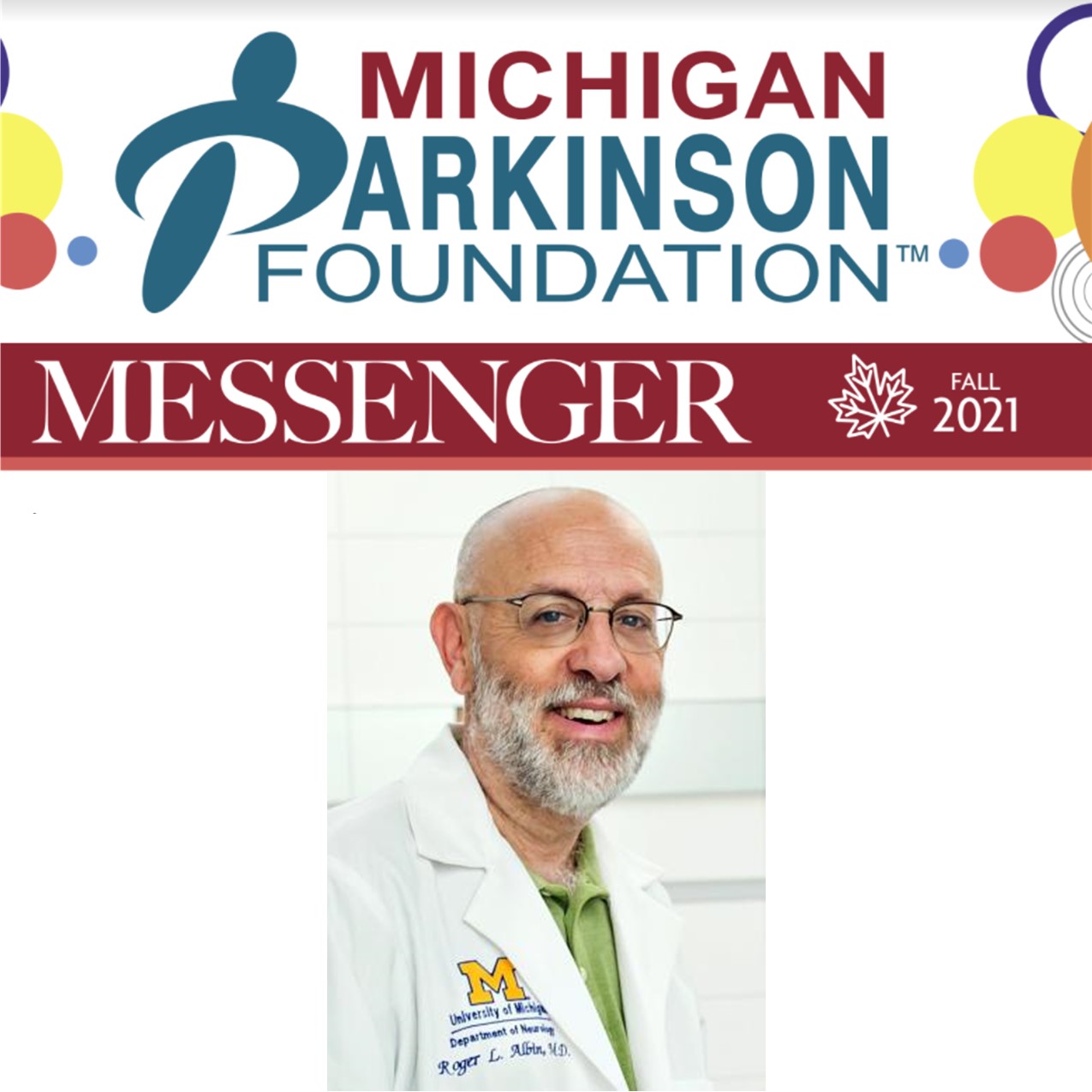 The following is an excerpt from the Michigan Parkinson Foundation Fall 2021 Messenger:

The University of Michigan was recently awarded a five-year, $11.7 million grant from the National Institute of Neurological Diseases and Stroke to re-establish a Morris K. Udall Center of Excellence in Parkinson’s Disease Research. The U-M team of clinician-researchers is led by Roger L. Albin, Anne B. Young Collegiate Professor of Neurology, co-director of the Movement Disorders Division, and director of the U-M Parkinson’s Foundation Research Center of Excellence. The National Institute of Neurologic Neurological Disorders and Stroke previously funded the U-M Udall Center from 2015-20. There are five Udall Centers nationwide, established in memory of the late U.S. Rep. Morris K. Udall of Arizona, who died from Parkinson’s disease in 1998.

Treatment resistant gait balance problems and cognitive problems of PD are the focus of UM Udall Center research. Up to 70 percent of patients with Parkinson disease fall each year, quadrupling the rate of hip fractures, leading to extended hospitalizations, increased use of skilled nursing facilities and eventual nursing home placement, and increasing risk of death.

The U-M Udall Center research team is an interactive and productive group of investigators from disciplines that include Neurology, Radiology, Psychology, and Biostatistics. A project led by Nicolaas Bohnen, Professor of Radiology and Neurology, uses novel brain imaging methods to show that the loss of various types of brain cells is strongly associated with falls, other gait problems and cognitive deficits, loss of ability to pay close attention to one’s movements and environment, and impairment of the perception of other forms of information important for movement. In closely related animal model work, the specific circuits underlying these problems are being investigated by investigator Martin Sarter, Charles M. Butter Collegiate Professor of Psychology, casting light on how attentional information is integrated with movement mechanisms to produce gait coordination. A project directed by Dr. Albin uses brain imaging methods to probe how loss of acetylcholine cells causes cognitive deficits and may identify a group of Parkinson’s subjects at risk for faster progression. In parallel work, Omar Ahmed, Assistant Professor of Psychology, is using animal models to study cellular mechanisms of acetylcholine signaling in a part of the brain crucial for spatial navigation.

This project will determine the relationship between loss of acetylcholine signaling in specific brain regions and the different gait and balance deficits of PD. Participants will be evaluated at several time points. Participants undergo extensive characterization of gait, balance, and cognition, accompanied by use of novel brain imaging methods to study acetylcholine systems.

In this project, Dr. Albin’s team is trying to understand the basis of impaired cognition in early to moderately advanced PD. Prior Udall Center research suggests that impaired cognition at this stage of PD is heavily influenced by loss of acetylcholine signaling in brain regions that coordinate the activity of other brain circuits responsible for specific aspects of cognition. This group of PD patients may be prone to more rapid progression of PD. Participants receive extensive characterization of cognition. Novel brain imaging methods are used to measure brain acetylcholine system changes. Participants are followed with repeated evaluations to assess changes in cognition and gait over time.

This project is being performed in collaboration with a research group at the University of Groningen in the Netherlands. The Dutch collaborators are performing parallel work in a similar group of PD participants, considerably expanding the amount of usable data.