The Udall Center of Excellence for Parkinson’s Disease Research at the University of Michigan focuses on understanding and developing treatments for gait and balance problems in Parkinson’s disease, catalyzing and expanding Parkinson’s research, training the next generation of Parkinson’s clinician-researchers. 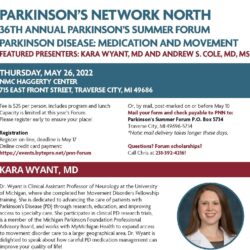 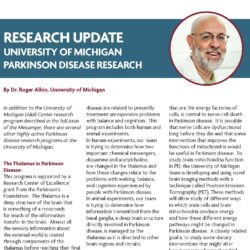 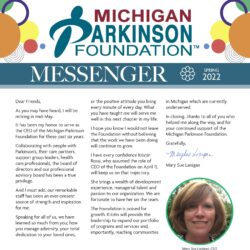 The Spring 2022 issue of the Michigan Parkinson Foundation is now available here. This issue of the newsletter features updates from our own Kara Wyant, M.D. about on page 10 and Roger Albin, M.D. on page 11. 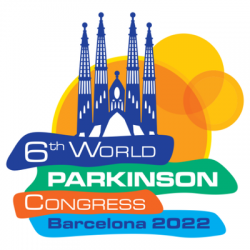 Everyone in the community who is touched by Parkinson’s, whether a researcher, physician, family member, clinician, nurse, or rehab specialist is welcome to attend the WPC 2023. World Parkinson Congresses are 100% inclusive scientific events. Every three years the WPC brings together basic scientists, neurologists, general physicians, nurses, rehab specialists (PT, OT, SLP), and a wide[…] 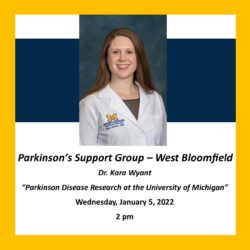 Dr. Kara Wyant presented at the West Bloomfield Support Group on January 5, 2022. The presentation was titled “Parkinson Disease Research at the University of Michigan” and was available via Zoom for those unable to attend in person. Presenter:  Kara Wyant, MD Clinical Assistant Professor Department of Neurology University of Michigan Location: Anthology Senior Living[…] 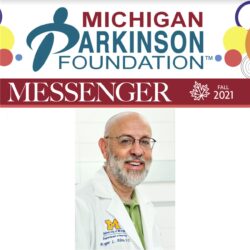 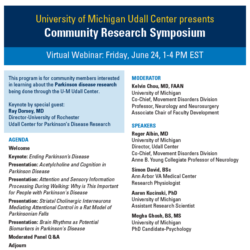 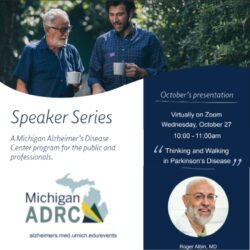 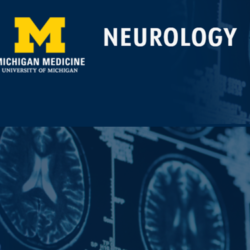 NIH Awarded the University of Michigan $11.7 Million to Fund a Udall Center of Excellence for Parkinson’s Disease Research 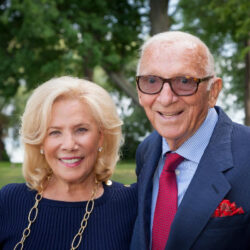 A special evening was spent honoring John and Marlene Boll for their generous support of the 30,000 people in our state who live with Parkinson’s, as well as their families and caregivers. The short video below shows how the support can impact lives: John and Marlene’s generosity gave promise to the very idea of the[…]